Ilford Factory Tour – Where Black and White Film is Made!!

I spotted a posting from Ilford Photo (Harman Technology) online a few months back offering a day’s tour of their photographic film and paper factory based in Mobberley, Cheshire. Being a complete film obsessive, as well as a love of industry in general this was too good an opportunity to miss. Emails were exchanged, accommodation booked and the 18th November 2013 was the big day.

As I navigated my way through the security gatehouse and through the vast site to the training centre I did feel a bit like Charlie on his way to the Chocolate Factory with a golden ticket. But with FILM!

The day began with a cuppa, the dishing out of white lab coats, and a browse through an excellent History of Ilford/Harman display which was made up of various objects, film boxes, literature etc: 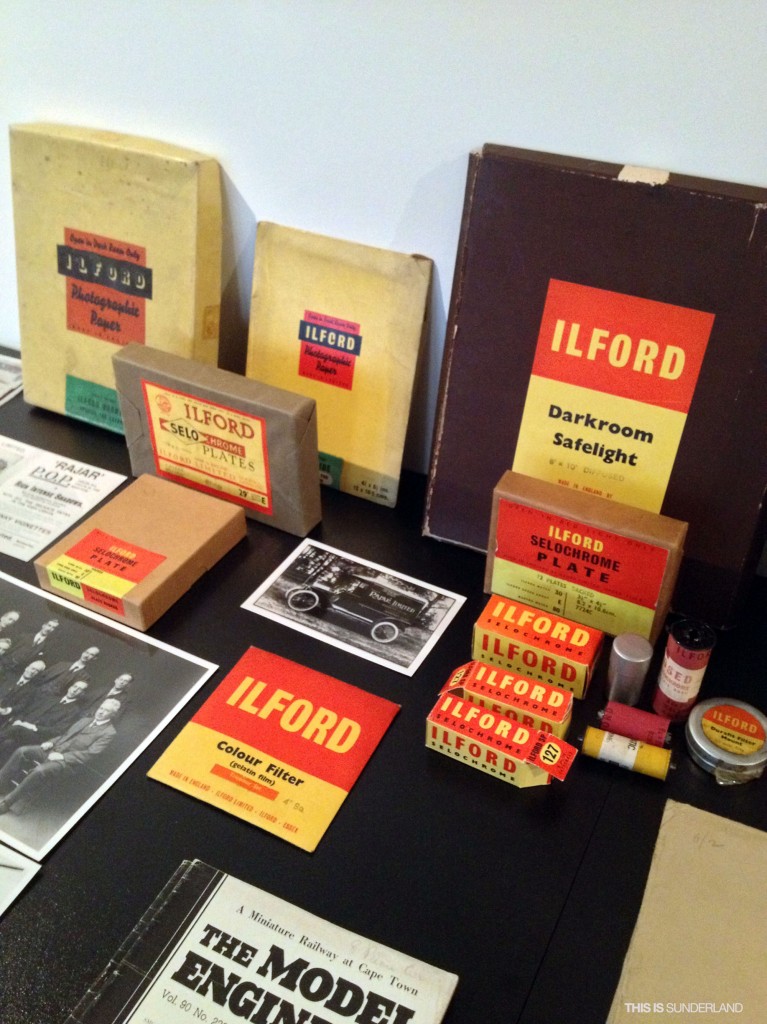 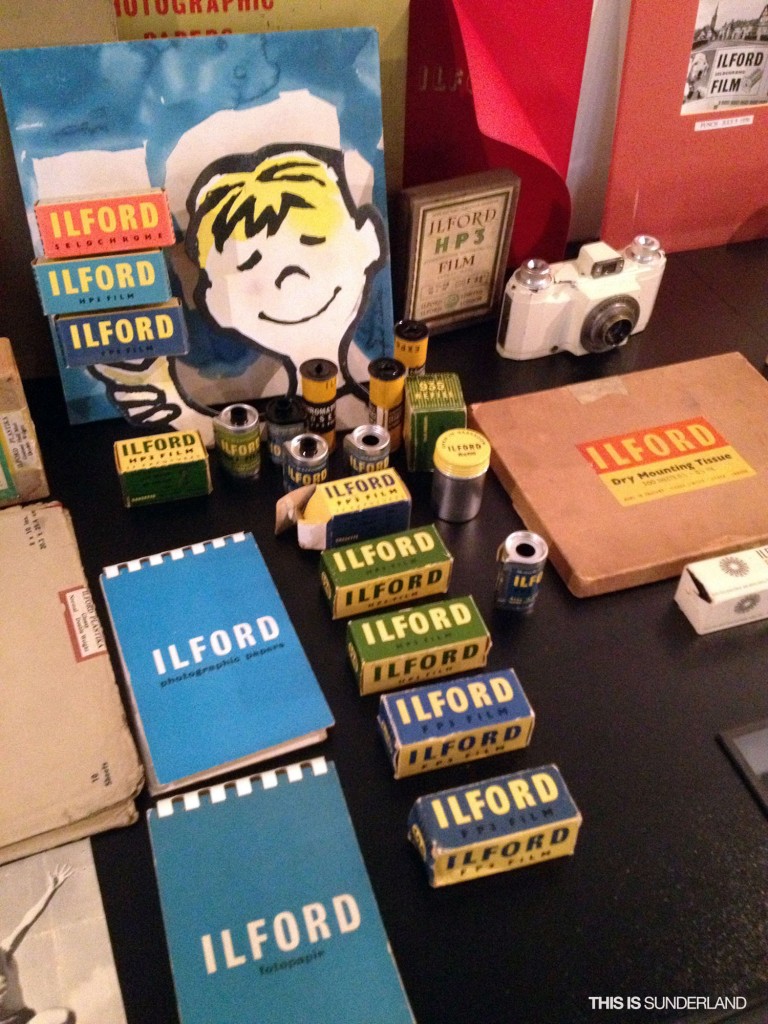 Then into the training room for by an intro from Simon Galley, one of Harman’s directors, and one of the team responsible for rescuing Ilford from the receivers back in 2005. And we’re all very grateful they did. Next up was Harman Technology Chairman Howard Hopwood with an overview of the company, past and present – fascinating stuff. 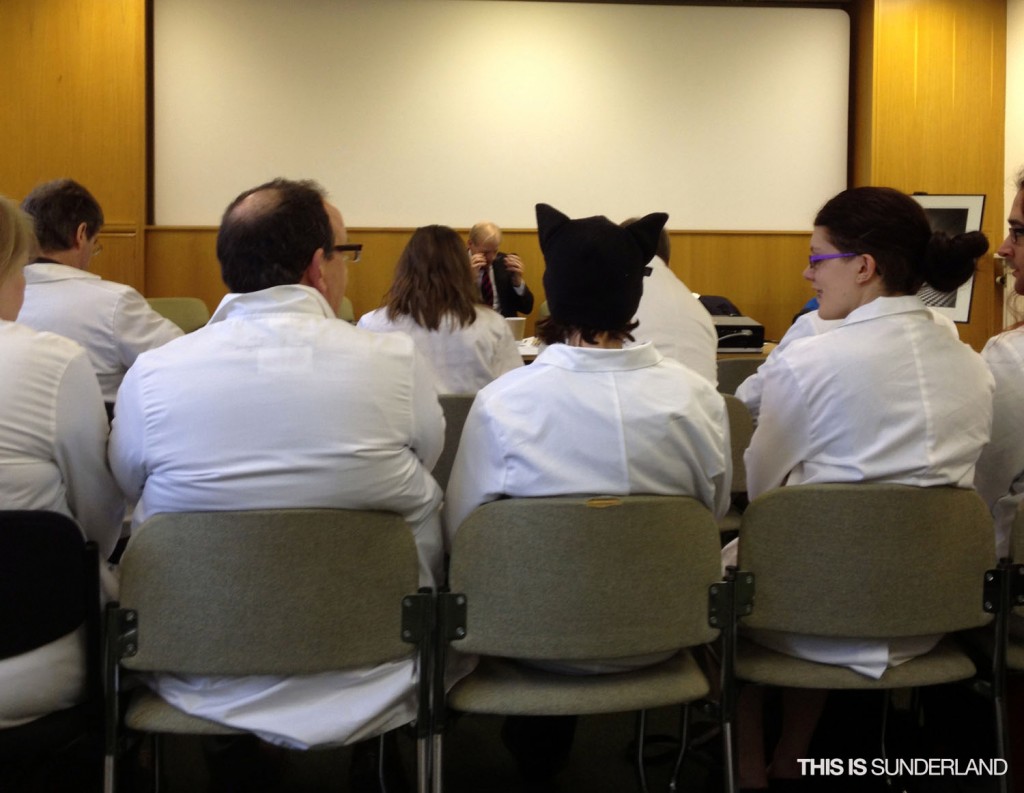 We then split off into three groups, each with a different itinerary and route around the vast site, I was part of group 1, led by Simon – which meant a day full of laughter and amusement!! Started off in the Ilford lab which is where the black and white processing and printing is done. Here’s the B&W processor, fully automated and very similar to the one Digitalab in Byker have by the looks of it. It handles Push/Pull processing with ease: 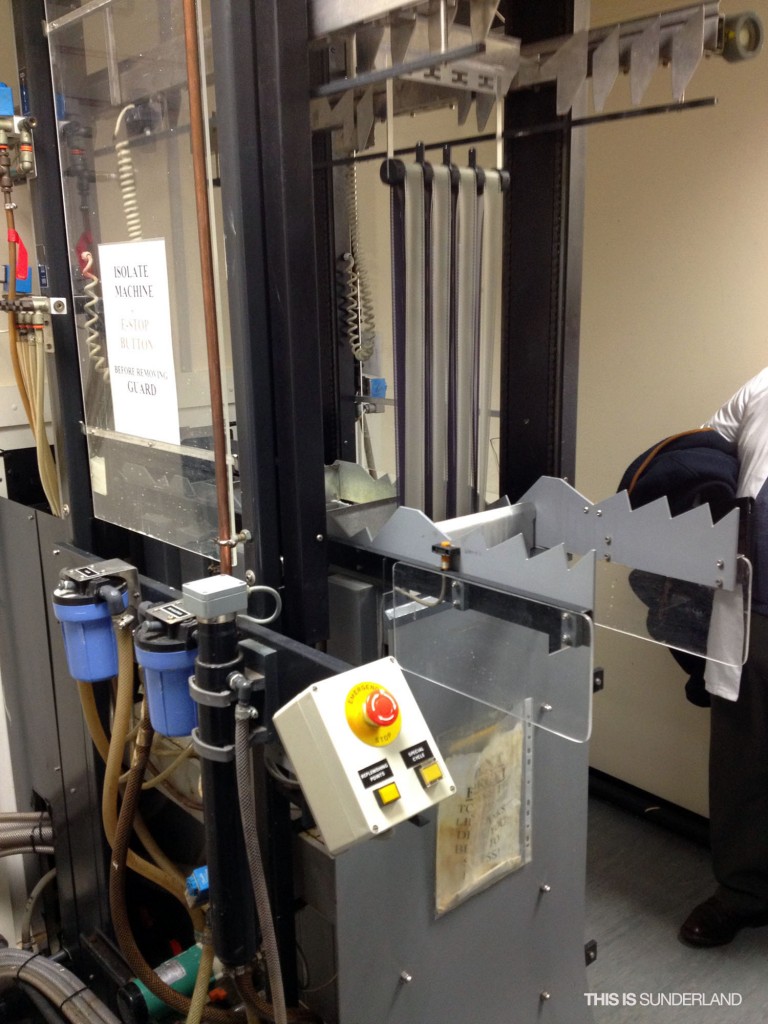 Ilford lab offers prints with every film processed, but also a unique offer which gives you the option to have a true black and white silver gelatin print made from any digital file using a modified large format Fuji laser printer and some others I can’t quite recall the names of. After looking at the quality of the prints coming out we were all blown away – far superior to a standard ‘desaturated’ digital print. Next exhibition of tintypes I’d hope can be printed using this method.

Next up, possibly the highlight of the day, the M27 coating area. This was a smaller scale version of the huge M14 coating machine, and where a lot of the R&D and testing was carried out by an extremely skilled and enthusiastic group of gentlemen. We were very fortunate to time our visit with seeing the actual emulsion being coated onto the film backing – an incredible sight. And smell! Ahhhh. 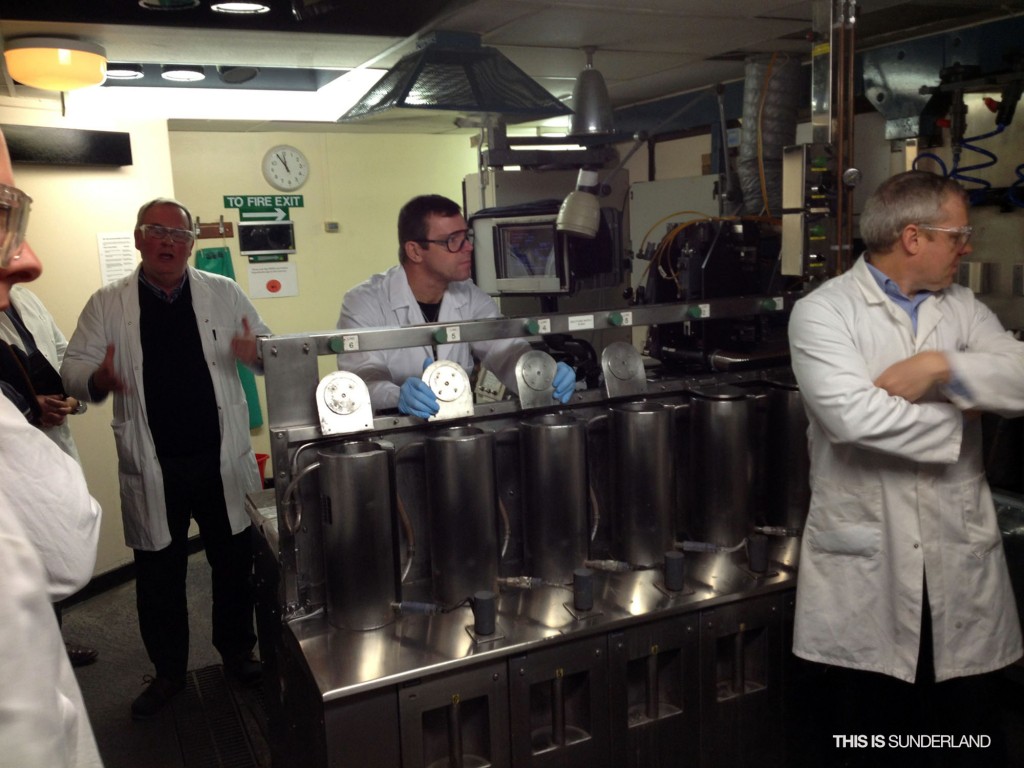 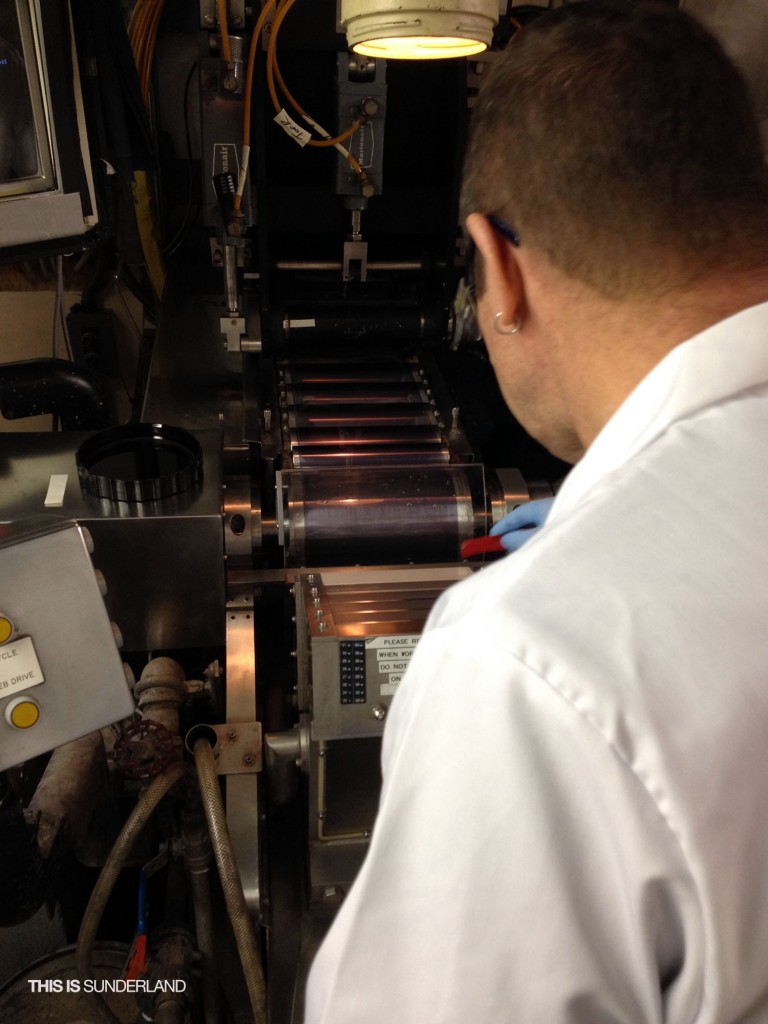 This was the other end of the machine where the coated film emerged for inspection and some of the uncoated rolls of film and paper substrates (excuse the terminology!?) are stored. 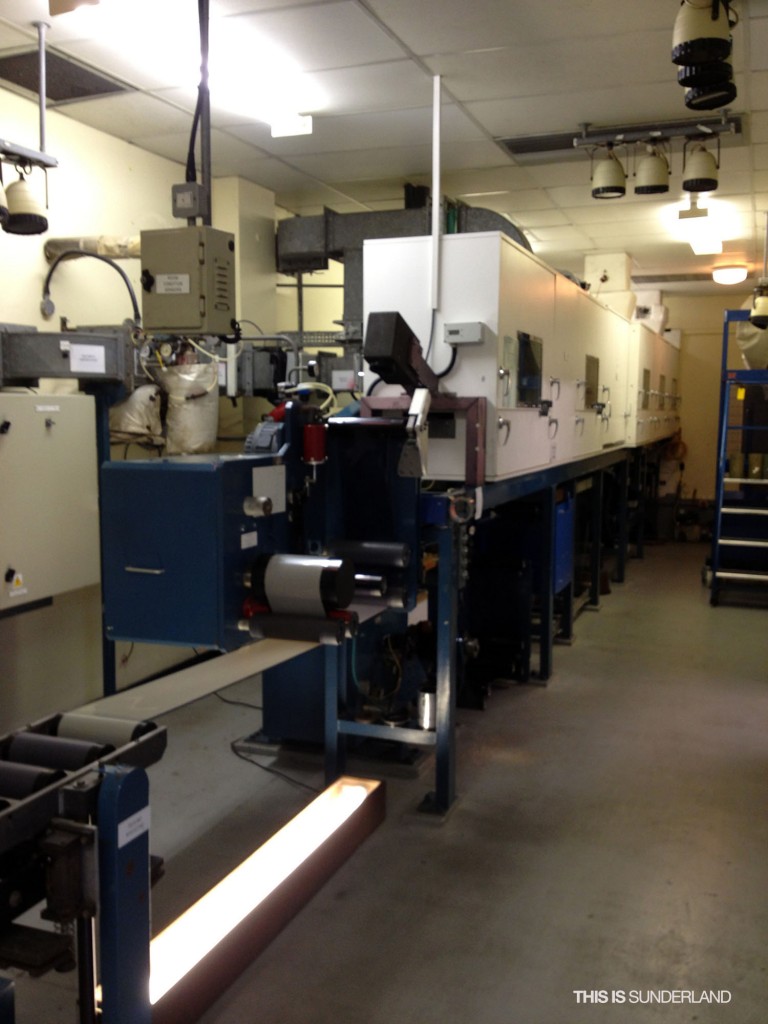 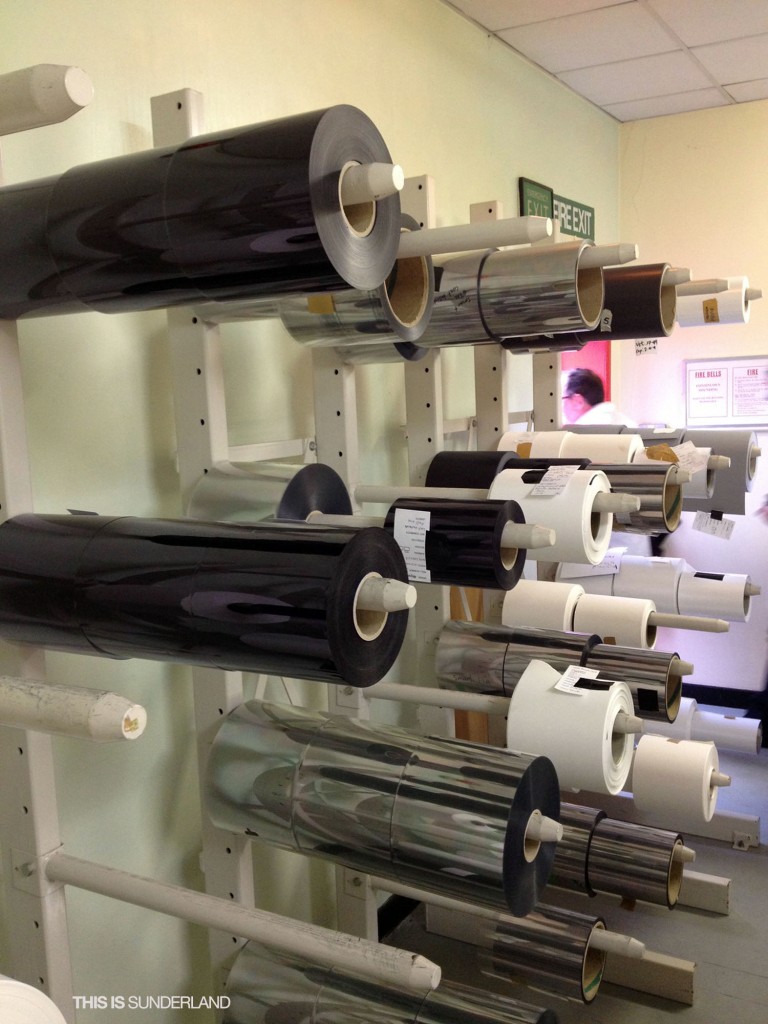 Simon then led us to ‘EP2’ – the area where the emulsion for both film and paper was manufactured, filtered, stored and more! We were talked through the science and process of emulsion making in great detail – fascinating stuff: 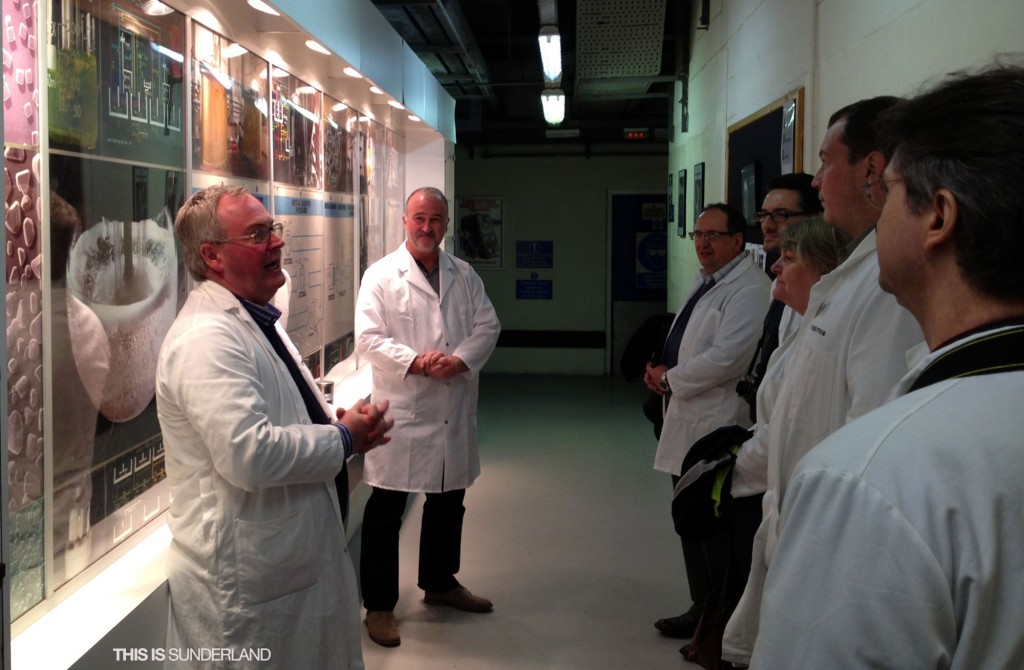 The equipment used to filter any imperfections from the emulsion was apparently very similar (if not the same) as what is used in breweries and ensures a very pure and consistent emulsion: 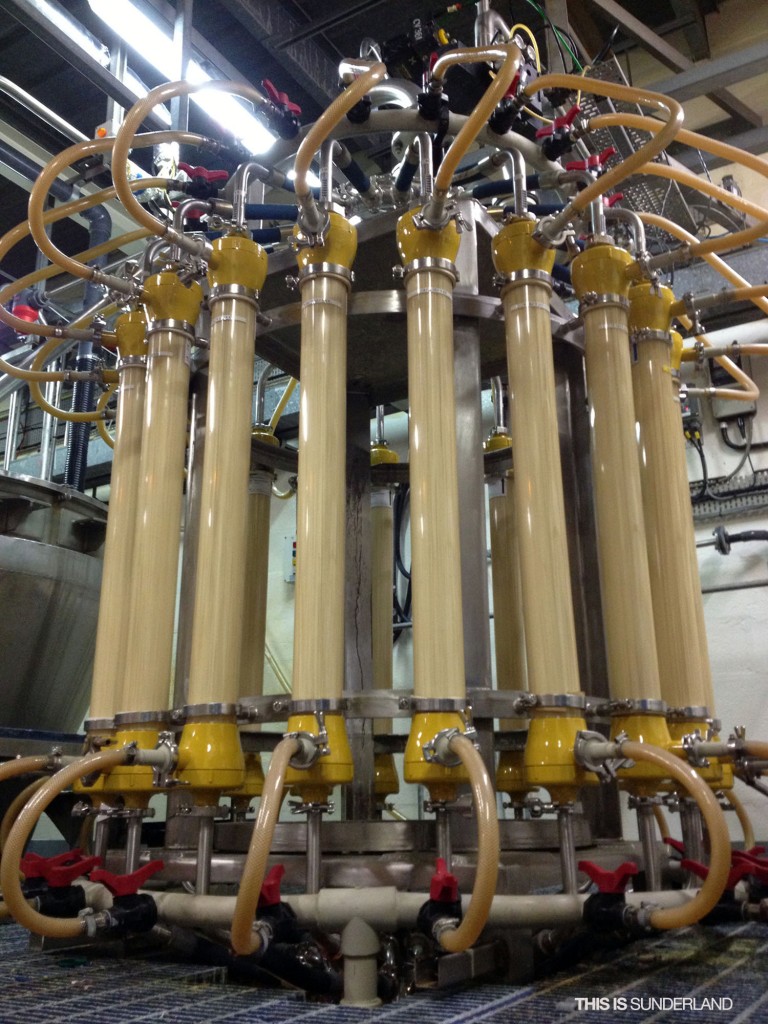 Cutaway of the filtration system: 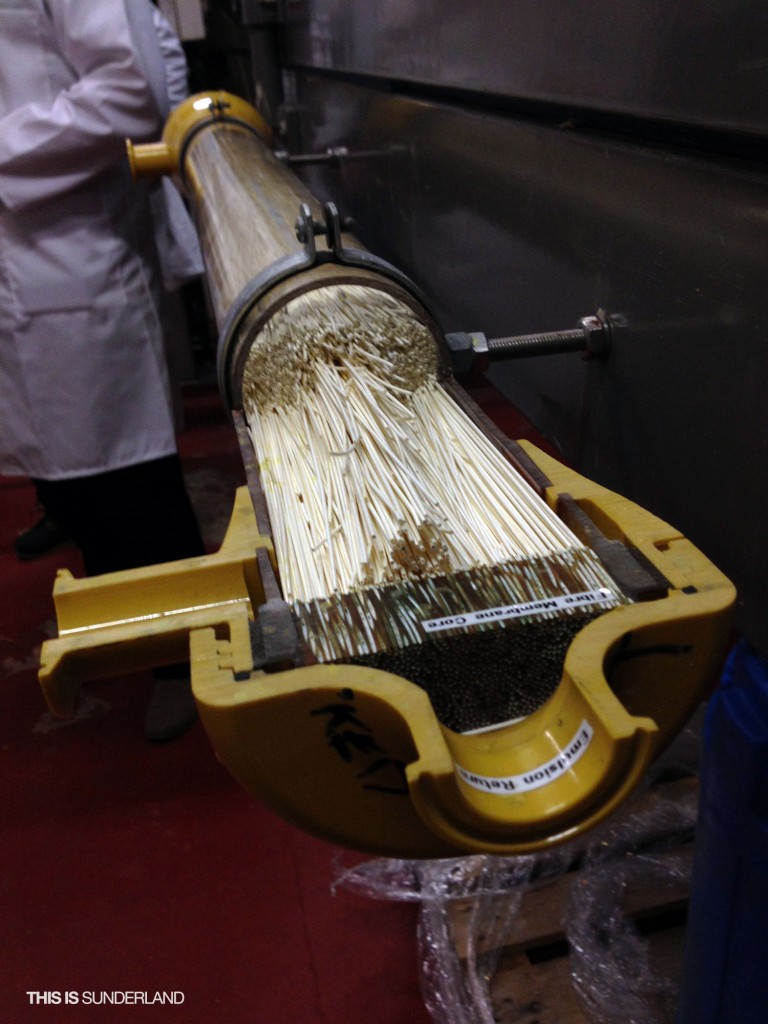 We were also shown around the cold store where the emulsions are kept, bagged off in a gelatinous state. Then moved onto M14, which was essentially a building sized paper and film coating machine spread across a few floors. HUGE! It had been translocated from its original location at the first Ilford factory, in, you guessed it….Ilford! And after reconstruction at Mobberley it stillworks very hard today. Here’s a plan of it:

Most of the machine was under safelight which meant no chance for photos unfortunately but it was a fascinating walk through some extremely low light areas with red-bulbed torches and many staff working hard in what appeared to be quite extreme and unusual conditions. And all seemed to be thoroughly enjoying it. A lot of the coated papers and film bases were stored in these galvanised, light tight ‘coffins’ around site: 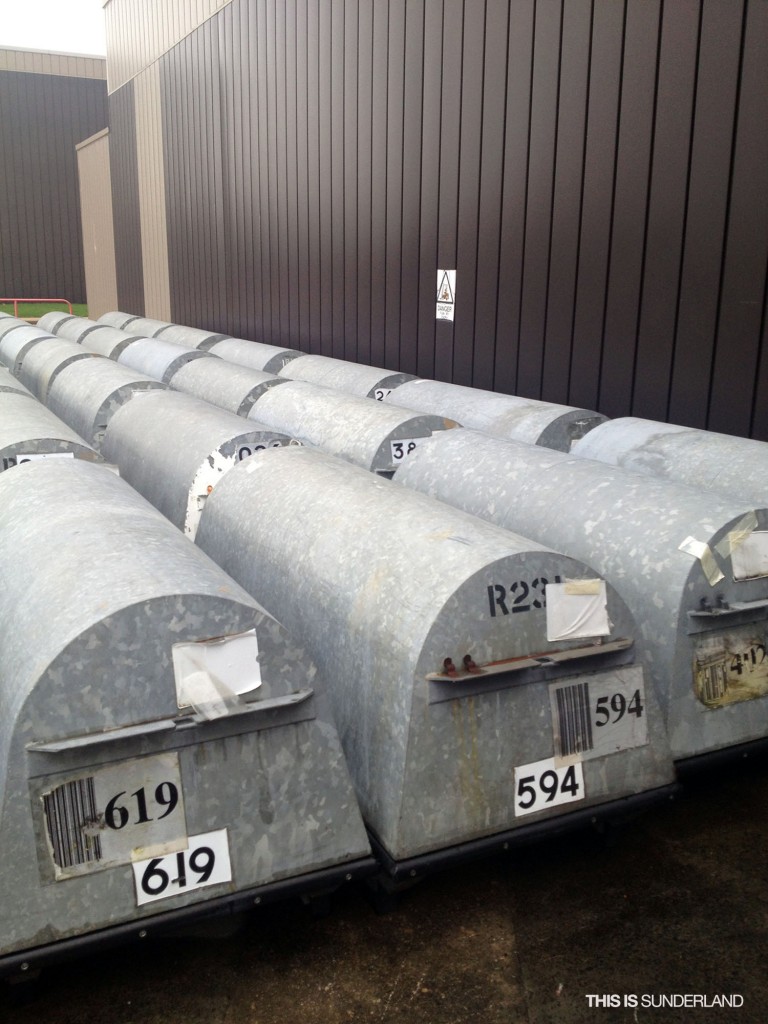 Lunch break time, there was so much to take in and very enjoyable to have a chat to the fellow people on the tour. 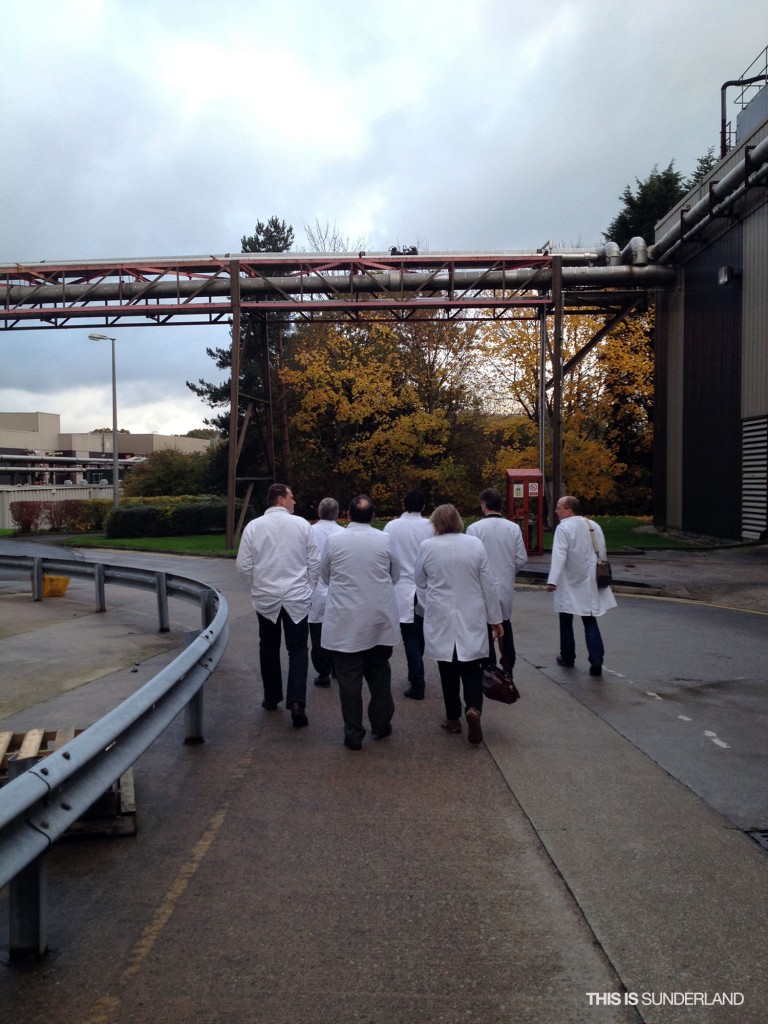 We started out after dinner in what I found to be one of the most interesting parts of the factory, the film finishing area. Basically where 35mm canisters are put together, rolls of 120 are put onto their spools with backing paper, and films are bagged and boxed. Plus a whole lot more.

Ilford had benefited from the closure of the AGFA factory in Germany and were able to purchase a huge set of machines from the receivers which saw to every single element of the film finishing. The downside was, the receivers literally just cut the hundreds of wires on the machines before removing them, which meant Ilford staff spent a whole year rewiring things to get the machines operational again. And a whole year learning German…

Starting off with flat sheets of metal with the relevant film logos/info printed on, this is fed into a machine where it is cut, the velvet light seal added and then pressed into the familiar canister shape before the centre spool is added. 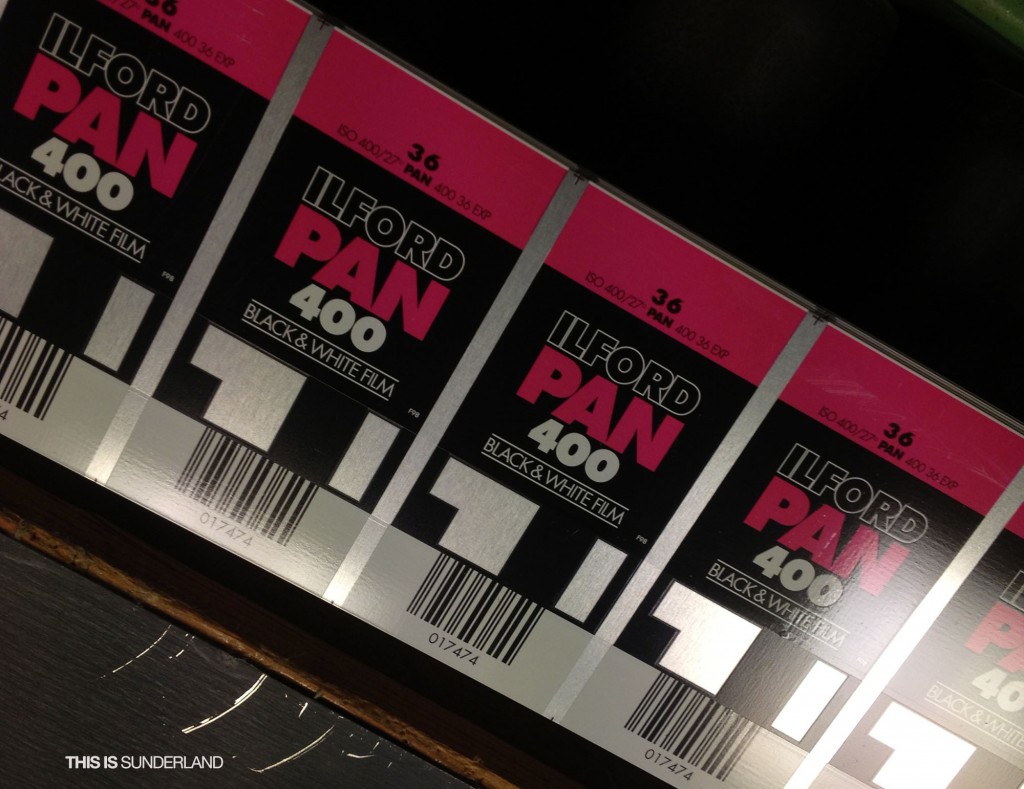 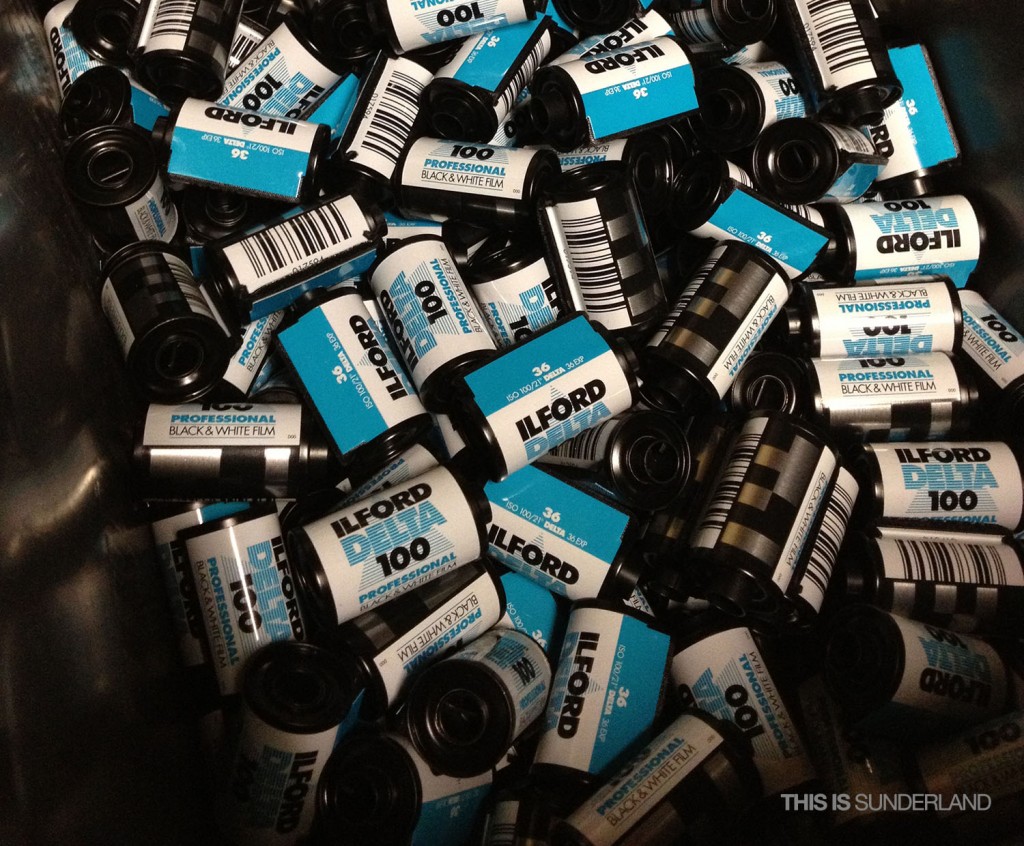 The film is then rolled onto the spool using a very clever technique which I’d never be able to fully understand, never mind explain! After which, the film is boxed, grouped into cellophane, put in a carton before being stacked on a pallet. The entire process was fully automated, very impressive. Hypnotic, infact. 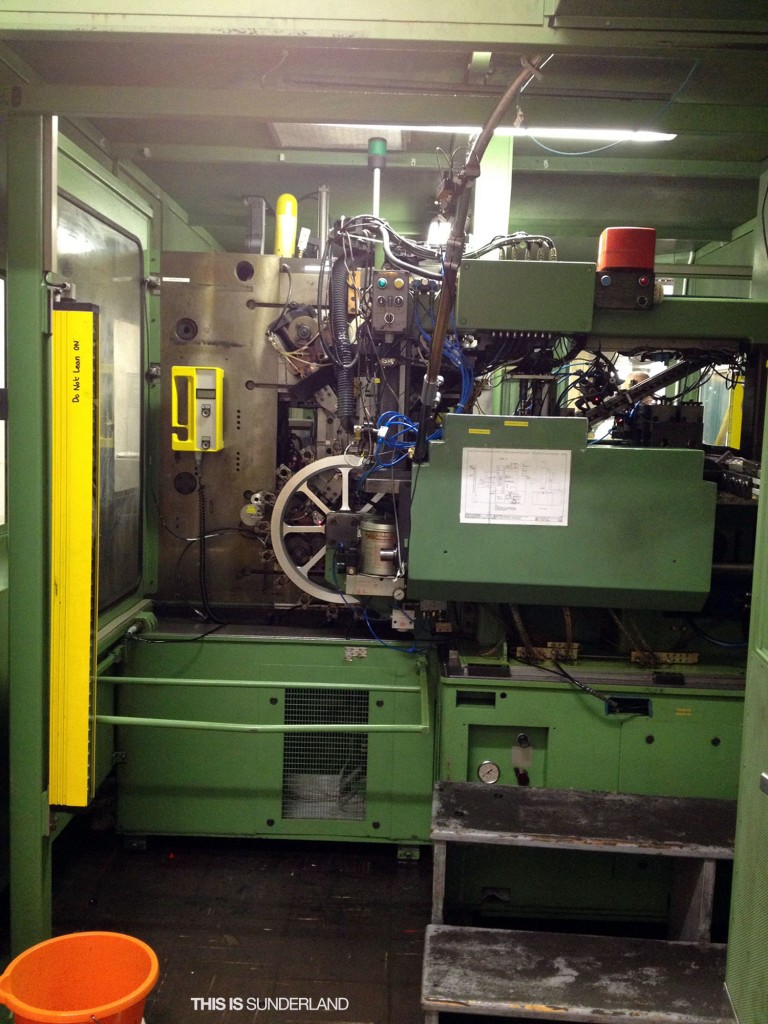 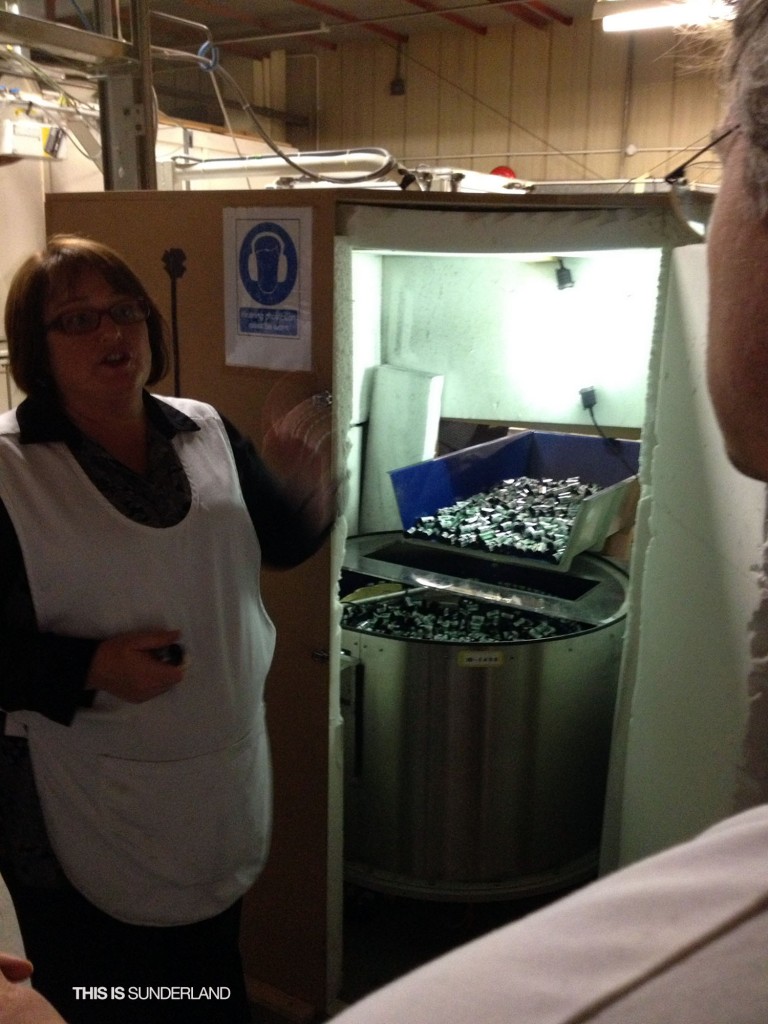 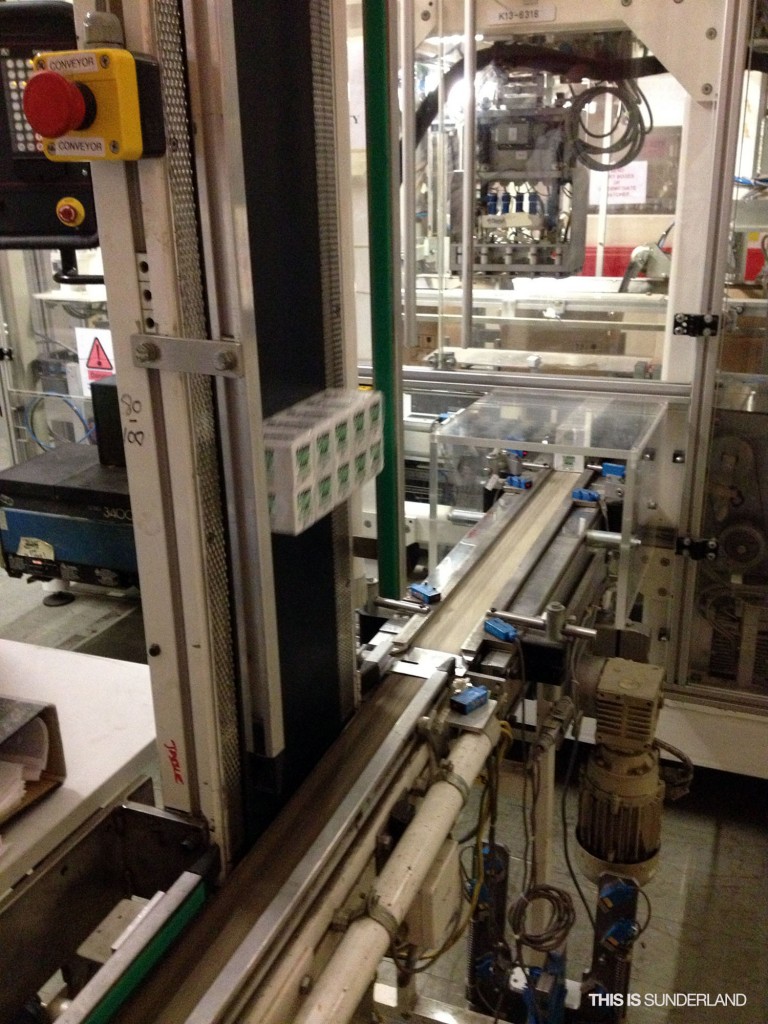 What was even more impressive, albeit less spectacular to watch was one of the two 120 machines which spooled the film, backing paper and adhesive bits to the reel automaticall. All in light tight conditions. The machines themselves were from the 1950s/60s and were still going strong, admittedly having had a lot of components replaced, usually with custom made bits from the Ilford workshops. Spares aren’t exactly available off the shelf for such unique machines! I may have heard this wrongly, but I believe they are two of the last few machines of this type surviving in the world. AMAZING. 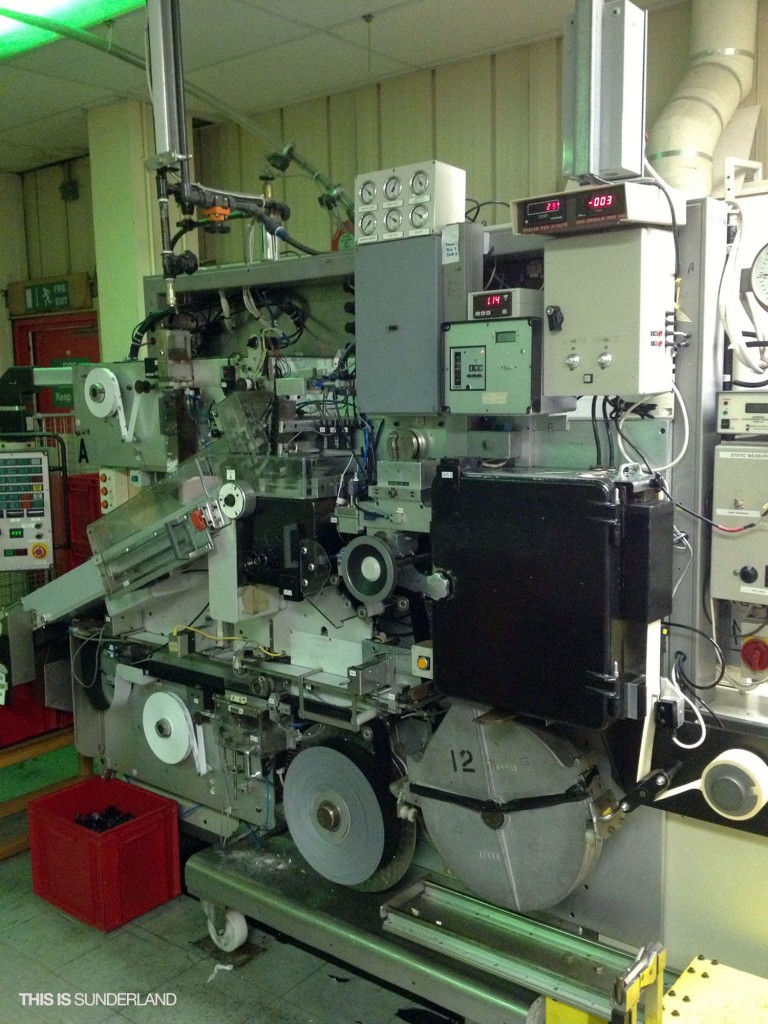 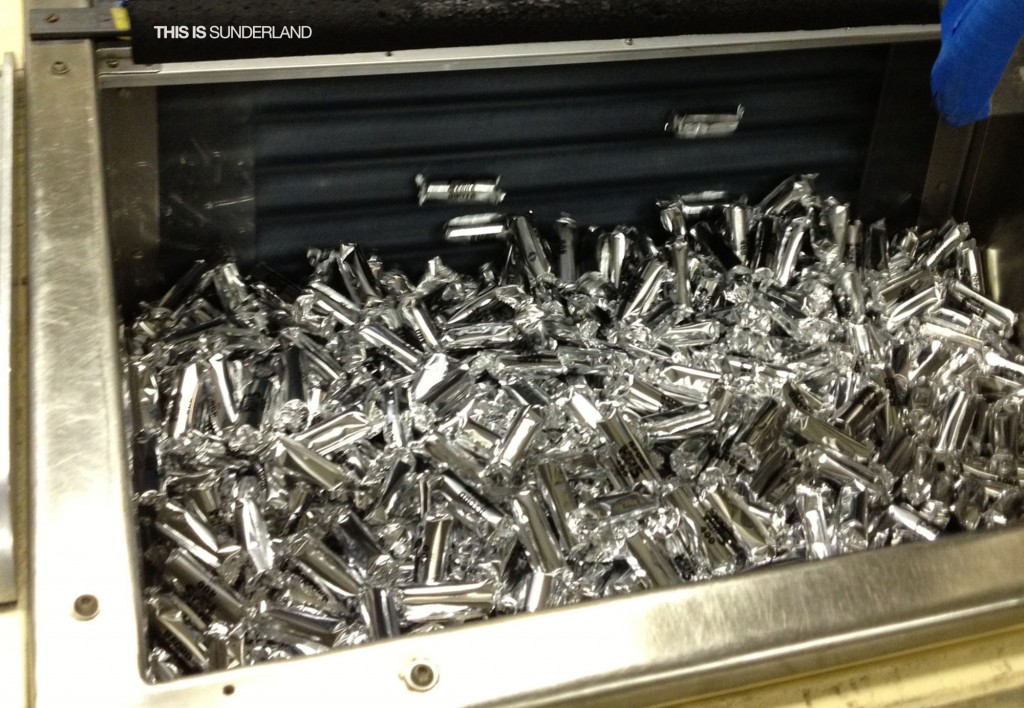 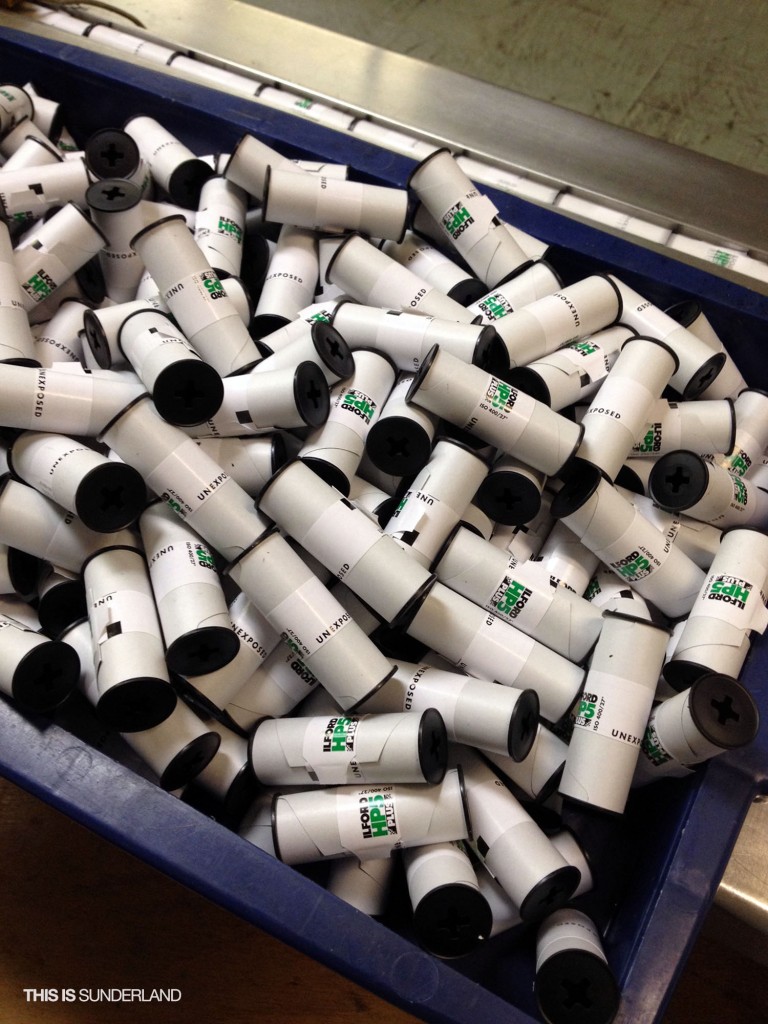 There were a couple of ILFORD signwritten wagons parked up around the site too, not sure if they’re still used but I’d dearly love to see one out and about on the roads!! 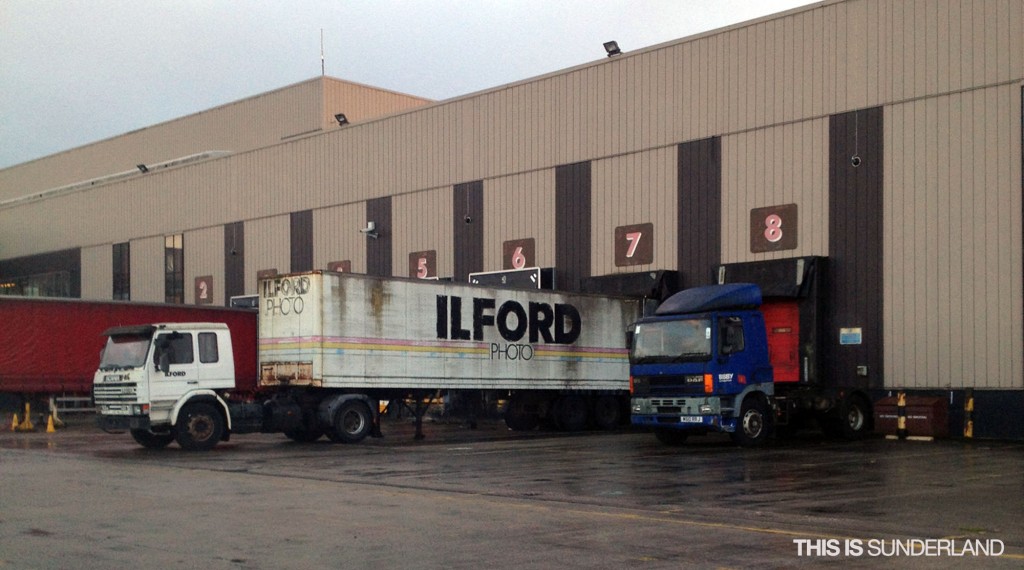 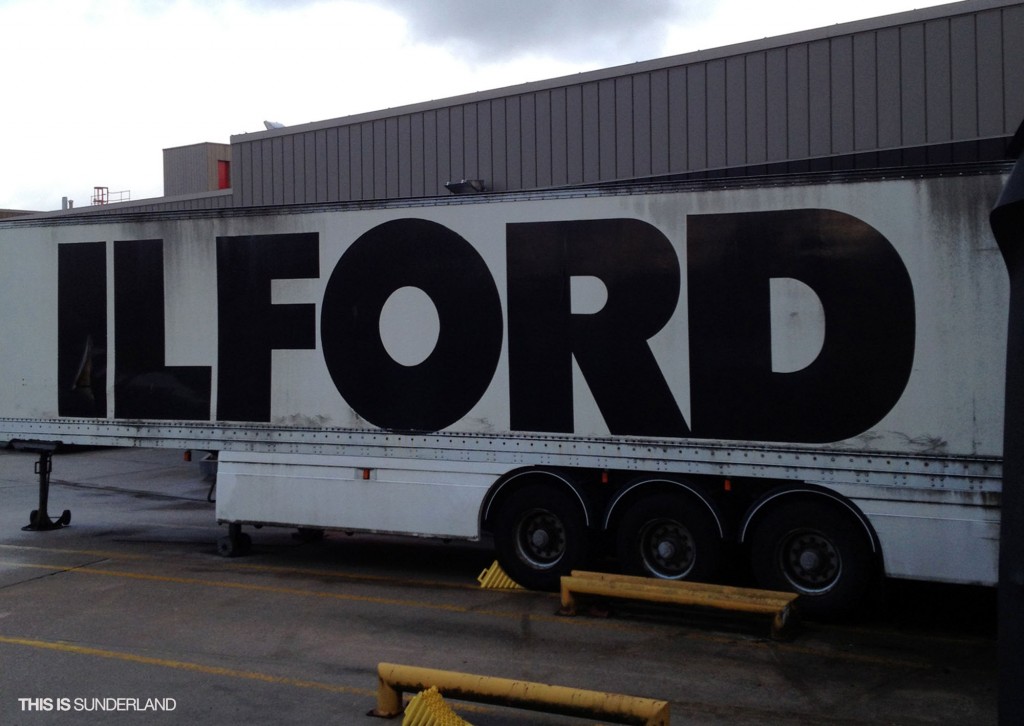 I’m sure I’ve missed a few bits out, it was such a busy day with lots to take in, and doubtless some of the facts and terminology I’ve described here may not be accurate in my hastily remembered writeup a month after the actual visit! Feel free to correct me…

And so, back to the training room for a debrief, final presentation and an opportunity for any questions. We were also offered a chance to buy film at a special ‘tour’ rate which most of us did – I stocked up on some HP5 120 with a specific project in mind.

To summarise, what Ilford/Harman Technology are doing here is incredibly refreshing to see. When other film manufacturers around the world are reducing ranges and forever releasing fearful sounding press releases about the future of film, Ilford are entirely positive in their approach, comitted to continuing production of their black and white films, papers and expanding into other markets to safeguarding the long term future and sustainability of the company.

It was quite clear from the start, that everyone we met who worked at the factory were incredibly passionate and enthusiastic about their job, the organisation and securing the long term future of black and white film. Not to mention a highly skilled bunch of people. And long may it continue.

What really stood out for me was just how much technology, skill, effort, and possibly most importantly, love, goes into producing film. Next time I crack open a box of HP5 or Delta 100, I’ll be all the more impressed now I know where it came from and what went into it.

And finally, we were all given a goody bag on our way out – THANK YOU to all at Ilford for a wonderful day. If you get a chance to go on a factory tour, don’t even hestitate for a moment. 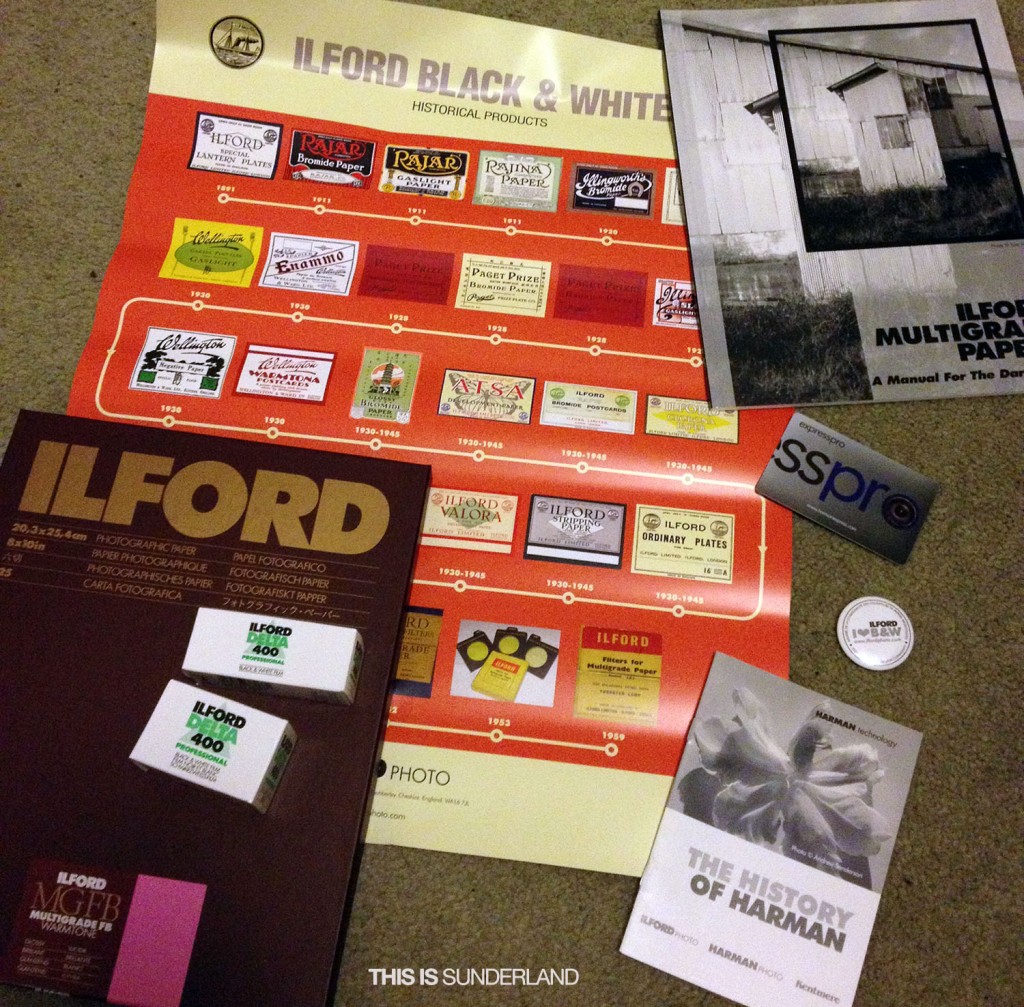 Special thanks to Michelle Parr, Simon Galley and all of the Ilford team for a superb, unforgettable day. Can I come back next year? 😀

Here’s a few video snippets from various bits of the tour as well. See that emulsion coating at the beginning, amazing: